Voting at the federal election commences on May 9th and we are still waiting for answers on Commonwealth Marine Park Plans. If nothing is heard, we can only assume the worst!!
The Hon Bob Baldwin

Recreational fishers are currently facing so many issues critical to the future of our recreational fishing industry right across Australia. Whether it is the Spanish Mackerel issue in Qld, the Demersal Scalefish reductions in WA or the Commonwealth Marine Parks issue to be addressed at the forthcoming federal election. We as an industry need to be united, build industry support and hunt as a pack to have our messages heard so to say.

Unity is our strength and not only has AFTA has been joined by the Boating Industry of Australia (BIA) & Game Fishing Association of Australia (GFAA) & Australian Recreational Fishing Foundation (ARFF), working as a team in our push for a better deal but by the commercial fishers represented by the Seafood Industry Australia (SIA).

Through inaction, all of us have something to lose.

As I have said many times before, “political issue success is all about the numbers, politicians understand numbers and numbers can help us, numbers can hurt them”, so we need affirmative action. Now is not the time for sitting back and relying on others to do the heavy lifting. If we all work together and share the load, we can have a measurable impact on the outcomes for our industries.

We need to pro-actively engage with local MP’s now so they can at least begin to understand our industry. When they understand the magnitude of votes in our industry, they may be more receptive to our needs.

Perhaps it is time to rediscover the AFTA Action Agenda on political engagement.

Now that the federal election has been called for May 21st, AFTA seeks absolute clarity from both major political parties on their stance on the Commonwealth Marine Parks Plan and their intentions for our industry.

AFTA, in partnership with the Seafood Industry Australia (SIA), Boating Industry Association (BIA) & Australian Recreational Fishing Foundation (ARFF), has written to both parties. The Liberal/National Government Minister for the Environment, Susan Ley and Labor Shadow Minister for the Environment, Terri Butler, we are seeking their policy commitment to no further changes to the Commonwealth Marine Parks Management Plan. Letters are available to read here.

At the time of writing this column, no responses from either party have been received. To be fair, it is only the Labor Party that proposed going back to the failed Commonwealth Marine Parks plan as announced in their 2019 election policy by former Shadow Minister, Tony Burke at the Labor National Convention.

Fishers, both recreational & Commercial, around the country need positive assurance the ALP would not re-introduce the original Marine Park Management Plans to the current model.

Individual politicians and their political parties need to understand that this is an issue of concern to over 6 million people engaged in recreational & commercial fishing and boating industries around Australia. We need you, our members, and your customers to engage with your local politicians to demonstrate their passion for our industry to earn their support on these crucial issues.

As pre-poll voting commences on May 9th, this does not leave much time for political parties to submit their policy details and commitments ahead of the forthcoming election.

This action will be to the detriment of all those in fishing, whether it is the recreational or commercial sector! AFTA will notify you immediately of any responses received.

To reiterate AFTA policy, we are seeking minimum proposals and commitments from all parties for: 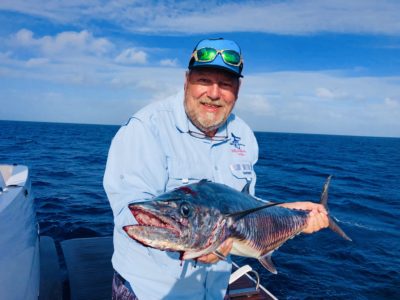 On April 6th, the Qld Government finally released its “Have Your Say” consultation survey on East Coast Spanish Mackerel.

AFTA questions the intent of this Survey and has made a submission and held media interviews on the Survey.

Fishers need to respond to the Survey, but in and on their terms! Please note that the Green movement has made a clarion call to supporters to make a number of submissions, and we need to combat that.

AFTA questions the very nature of the Survey, given the limited selection of multiple choice answers, answers which would have a  critical impact on our industry.

I have spoken with Qld Fisheries about the Survey and its inadequacy. Several questions are skewed towards the answers the DAF Expert Working Group wants to hear to support their position and not those of genuine industry participants. In response, they stated that it is only phase 1 to which I responded, “how many phases do you intend to have before you implement your policy on July 1st 2022??”  Qld DAF has offered to meet with the AFTA Board to “explain the changed process for consultation and timeframes.”

Through the rapid action of AFTA WA members, Minister for Fisheries Don Punch released a “Have Your Say” survey on stock recovery measures for iconic dhufish and pink snapper. On the surface, this sounds like a good consultative process; however, it is limited by a time frame closing on April 29th. That in itself is insufficient for proper and adequate engagement.

It is imperative that members and rec fishers alike spend the time to engage in the consultation process through RecFishWest.

The recreational fishing industry in WA engages over 700,000 recreational fishers (1 in 3 voters) and contributes over $2.4 billion to the WA economy. The anglers in WA were angry with the initial proposal by Minister for Fisheries Don Punch. He wants to cut dhufish and pink snapper catches between Augusta and Kalbarri to reduce the total catch for demersal species by 50 per cent to meet 2030 recovery targets in WA.

Let’s hope the Minister now listens to the rec fishers across WA.

It is crucial to sign up for the WARFA petition; our strength is in our numbers, so please help distribute!!

We as an industry have both challenges and opportunities ahead of us, it is abundantly clear we need to work together to achieve an outcome and it is, all about the outcome.