political issue success is all about the numbers – politicians understand numbers.  Numbers can help us, numbers can hurt them

There are so many issues affecting the recreational fishing industry coming to the surface right now across Australia requiring immediate action that, as an industry, need to build support and hunt as a pack, as so to say.

This is a Call to Arms!!

AFTA has been joined by the Boating Industry of Australia (BIA) & Game Fishing Association of Australia (GFAA) & Australian Recreational Fishing Foundation (ARFF) working as a team in our push for a better deal on the sustainability of the Spanish Mackerel fishery in QLD and other key issues throughout Australia.

Please understand we have more areas of concern in common with the commercial fishers represented by the Seafood Industry Australia (SIA) than reasons to be opposed, take a possibility of the re-introduction of Commonwealth Marine Parks at the next federal election as an example.

For an industry that represents the 5 million-plus recreational fishers and thousands of jobs in our industry combined with the economic contribution across Australia, the recreational fishing sector voice must be listened to. We need you, our members, and your customers to engage with your local politicians to demonstrate your passion for our industry to earn their support on these important issues.

Most politicians are just too busy to fish so we need to pro-actively engage with them so they can at least understand our industry.  When they understand the magnitude of votes in our industry, they may be more receptive to our needs.

Perhaps it is time to rediscover the AFTA Action Agenda on political engagement.

Speculation is that the federal election will be called for May 14th and this does not leave a lot of time for political parties to submit their policy details and commitments ahead of the forthcoming election.

Whilst AFTA has written to all major parties, we have not had a specific response from either the Labor Shadow Environment Minister, Terri Butler or Labor Shadow Fisheries Minister, Julie Collins as yet on whether the Labor Party will drop their 2019 election policy, announced by former Shadow Minister, Tony Burke in an address to the Labor National Convention that the ALP would re-introduce the original Marine Park Management Plans to the original model.

This action will be to the detriment of all those in fishing whether it is the recreational or commercial sector!

AFTA has stressed that policy must be received prior to the commencement of election pre-polling otherwise AFTA will record and publish “No Response Received”. Click here to read the letter.

To reiterate, AFTA is seeking as minimum proposals and commitments from all parties for:

In an astounding result, it appears the Liberal Party have lost government in SA with about a 5.5% swing to Labor.   I say that because at the time of writing my report only 50% of the vote had been counted and some seats are still too close to call, though the projections show the ALP as having 28 seats needed to form government and will govern without the need of the 6 independents and it appears that Premier Stephen Marshall and Minister David Basham have both lost their seats in the process.

AFTA offer our congratulations to Peter Malinauskas on his victory and our new Minister for Recreation, Sport & Racing, Katrina Hildyard MP on her re-election.

Importantly the MRFAC model of consultation will be abandoned and, in its place, Recfish SA will become the independent representative voice on recreational fishing with a budget allocation of $200,000 per annum.

The published ALP policy, now to be delivered, is available here.

AFTA and SA members will work with the new government and the Minister-elect to ensure the best possible result for recreational fishers.

Last week in the Queensland Parliament AFTA, represented by Kord Luckus, Qld Director & Col Tannahill, Immediate Past President representing President Michael Starkey (unable to attend due to personal flood issues) along with Ian Bladin, President of the GFFA met with Fisheries Minister Mark Furner and his Department and then later in the day met with David Crisafulli, Leader of the Opposition & Shadow Fisheries Minister, Tony Perrot to discuss the future of the Spanish Mackerel Fishery and its impacts on the recreational fishing industry.

AFTA asked for the justification in the modelling and methodology of the stock assessments as we have continually questioned the modelling of the sustainable stock & capture rate by Qld Fisheries at all levels in Qld.  As a result, the government commissioned a review of the modelling methodology and whilst the modelling was proven correct in the peer review this does not change the fact that there are some serious concerns about the initial and subsequent data set inputs that determine the current stock assessment biomass for Spanish mackerel as estimated to be 17% of unfished biomass which the government state is unsustainable.

AFTA will keep members informed as to the progress of these discussions.

AFTA Members do need to be concerned particularly when reading extracts from the “Communique of the Fishery Expert Panel meeting on 3 November 2021”  highlighted below:

Fisheries Queensland provided an update on the East coast Spanish Mackerel fishery stock assessment and in particular, the outcome of the independent review, which queried particular values on which the model was based. The stock assessment team have devoted considerable time to investigating this concern and modelling additional scenarios.

The Panel commented that the reviewer’s comments were justified, but the department’s response is considered defensible.

Given that the Department’s model is more precautionary than the reviewer’s, the Panel considered that the most responsible way forward is to accept the stock assessment base case as the most credible scenario and make management decisions accordingly. The uncertainty regarding the model parameters of interest will be progressively resolved by future stock assessments.

The Panel also heard that a bridging analysis between the type of model used in 2016 and the model used in 2021 is being undertaken for the Torres Strait and the results will be relevant to other parts of Queensland. The Panel suggested additional assumptions that might have contributed to the difference between the 2016 and 2021 assessments, which the stock assessment team will investigate further. Given the likely impact of the new assessment of management decisions, the Panel stressed the importance of plain English explanations of key differences between the assessments and justification for the use of the base case.

Fisheries Queensland outlined several management options for Spanish mackerel in response to the stock assessment. The Panel reiterated their previous advice that options that do not align with the Harvest strategy policy’s minimum rebuilding timeframes should not be considered. Viable management options should be expected to produce detectable evidence of rebuilding, assuming rebuilding occurs as per modelled predictions. Potential issues were discussed including a possible effort shift to New South Wales, high grading, post-release mortality and the practical difficulties of maintaining an equitable approach to both constraining recreational and commercial catch.

The Panel expressed caution about the presentation of potential social and economic impacts, which may be misleading if not presented in an appropriately nuanced manner. It was also noted that in a rebuilding scenario, ecological considerations in terms of the stock biomass need to be paramount: without fishable biomass, there can be no social and economic benefits. 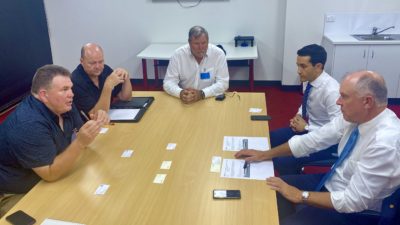 Kord Luckus and I will be representing AFTA at the Cairns meeting on 24 March.

Note that Minister Mark Furner, David Crisafulli & Tony Perrot have all been invited to attend the meeting.

For an industry that engages over 700,000 recreational fishers (1 in 3 voters) and contributes in excess of $2.4 billion to the WA economy the anglers in WA are angry with the initial proposal by Minister for Fisheries, Don Punch to cut dhufish and pink snapper catches between Augusta and Kalbarri to reduce the total catch for demersal species by 50 per cent to meet 2030 recovery targets in WA. Read the full statement here.

As a result, a petition has been launched by the WA Recreational Family Fishing Alliance (WARFA) calling on Minister Don Punch not to act on the West Coast Demersal Scalefish Resource (WCDSR) Harvest Strategy Reference Group recommendations immediately and to allow time for consultation to gather a broader picture of both positive and negative impacts so a more informed decision with our industry can be made.

AFTA Members are to be congratulated for their rapid action on this issue, they have been very active, and I am now informed that the Minister is now considering extending and broadening the consultation process and timeframe that will allow for proper community engagement and consideration of the latest science and associated management discussions.

This is a dramatic improvement on the original rollout timeline and it is critical that a transparent inclusive process that provides the community multiple opportunities for input and directly involves key stakeholders including the tackle, marine, tourism and related industries must be established before any discussion on management occur.

A key part of this process is the formation of an expert working group to assist assess all ideas and options, support community engagement and have input into any final proposed management options that would go out for formal public consultation.

We as an industry have both challenges and opportunities ahead of us, it is abundantly clear we need to work together to achieve an outcome and it is, all about the outcome.