Have you considered the issue of workplace discrimination, privacy and bullying of unvaccinated workers in your business?

Well, how is your business going??? This is the question I keep asking our members as we work our way through this pandemic …… together.  The responses have been varied depending on which state you are in and whether your business relies heavily on inbound tourism to be profitable.

The good news is that now that NSW & Victoria have eased travel restrictions and border access for the fully vaccinated it will be a boon for tourism and that’s good for recreational fishing.

In the other states, the story is very different.

Queensland is taking a staged approach and when Queensland hits the 70 per cent double vaccine level, expected by November 19 – fully vaccinated interstate residents from declared hotspots will be allowed to fly into Queensland. They will need to have received a negative Covid test within 72 hours of their flight and will then have to quarantine for 14 days at home.  When Queensland hits 80 per cent double dose – expected on December 17 – fully vaccinated Australians from interstate will be free to drive or fly into the state. The negative Covid test within 72 hours of the flight will still be required however home quarantine will be scrapped.

South Australia will ease its border restrictions for double-vaccinated people from November 23.

In Tasmania, from the 15th of December, anyone will be able to enter Tasmania from anywhere within Australia, subject to being fully vaccinated (12 years and over) and having a negative test result within 72 hours of travel.

The Northern Territory government announced that 14-day home quarantine, under strict testing protocols and app-based monitoring, would be introduced for fully vaccinated domestic travellers arriving in the NT from November 23 and a shortened home quarantine period to seven days from December 20 & January 18 the target for the end of quarantine altogether

Western Australia … what can I say premier Mark McGowan did not set a specific reopening date but said controls would be eased once the state achieved 90% vaccination for people aged 12 and above with a probable date of late January or February.

Please make your own checks before any travel as Covid restriction conditions are very fluid.

COVID-19 and your business

Have you considered the issue of workplace discrimination, privacy and bullying of unvaccinated workers??

Do you know what do you need to keep in mind to avoid claims of unlawful discrimination, bullying or breach of their privacy?

Please take the time to read this very informed article from Business Australia and be aware of the situation.

AFTA met recently with NSW Minister Adam Marshall and the heads of the NSW DPI Fisheries to discuss: 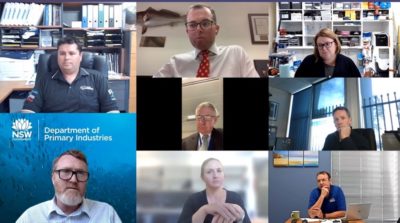 COVID Restrictions and the impacts on our member’s businesses across the State. We again raised how narrow-focused the idea was of a 3nm limit off your own LGA and that people should have been allowed to travel to the Shelf as there were no more people in the boat than would have been at the marina or ramp.

Minister Marshall stated that he had tried, but Minister Hazzard refused to listen to common sense.  Please note AFTA had lobbied a range of Ministers, including Minister Hazzard’s office on this issue.  It was OK to go to Bunnings but not the Shelf.  Just crazy to say the least!!

NSW Marine Parks, in particular, the Great Lakes/Port Stephens Marine Park which was established in 2005/2007 with a review meant to be after 5yr and now 16 years later it is well overdue, our industry needs to know when will review be released. Finally, the NSW Government has released a draft Management Plan for the NSW Mainland Marine Park Network (2021-2031) for community consultation.

Over the next three months, they are seeking community input on this draft plan and the future management of the Cape Byron, Solitary Islands, Port Stephens-Great Lakes, Jervis Bay & Batemans marine parks. The draft 10-year plan identifies the environmental, social, cultural and economic values to be conserved by marine parks, the threats to those values and a road map for their future management. Visit https://yoursay.marine.nsw.gov.au/ to access the draft plan, videos, fact sheets and answers to Frequently Asked Questions.  Interested organisations and individuals can choose to provide advice by completing a simple survey or making a more detailed online submission up until 31 January 2021.

With Qld looking to make changes to the capture of Spanish Mackerel members are concerned of the flow-on effect into NSW.  Minister Marshall stated that “NSW was not committed to any decisions that QLD may or may not take in respect to any fishery including Spanish Mackerel and that NSW acts independently on the science & advice from the NSW departments.”   This is good news for Recfishers in NSW.

AFTA asked to be more involved in the policymaking in NSW that affects our member’s interests.  As a result, AFTA has been invited by Peter Turnell, Director, Fisheries and Aquaculture Management & Sean Sloan, Deputy Director-General, Fisheries, to commence a monthly catch-up along with other key recreational fisheries stakeholders including, Inland Waterways and OzFish.  These monthly meetings will be informal conversations on the latest updates from Fisheries on strategic priorities and emerging issues.

The Recreational Sea Fishing Strategy to guide Tasmania for the next decade has been released.
It identifies that more than 100,000 Tasmanians go recreational fishing each year and contribute an estimated $160m a year to Tasmania’s economy spent on accommodation, fuel, bait, tackle and other equipment.

The Recreational Sea Fishing Strategy recognises the social and economic importance of recreational fishing and outlines a forward-thinking approach to the future of marine recreational fisheries that includes a new vision and core principles to guide decision-making.

The Strategy outlines 54 actions under six key outcome areas including fisheries sustainability, promoting responsible fishing, community involvement, valuing recreational fishing, making it easier for people to go fishing and improving support for fishing. As an early commitment to the Strategy, the Government has pledged $2.9 million to provide and upgrade fishing infrastructure and implement key actions under the strategy.

Progress reports will be provided annually with major reviews undertaken in 2024/25 and 2028/29.  The Strategy is available at www.fishing.tas.gov.au/rec-strategy

Rec Fishing grants are currently being assessed and a decision will be announced in December.  AFTA has two applications submitted.

Qld Minister responsible for recreational fishing, The Hon Mark Furner, has launched the “Let’s Fish QLD” media campaign.   AFTA encourage all members to use the resource to help grow participation in the industry.  Links to download the videos are available here.

AFTA will keep you informed on our progress, on Spanish Mackerel, but progress on the “legal fillet length -v- legal species length” discussions as a well as our advocating on resource sharing with the commercial sector across a range of species, including the winner takes all approach with Black Jewfish.

SA Minister David Basham MP has handed the responsibility for the release of the “Let’s Fish SA” social media campaign to the Ministerial Recreational Fishing Advisory Committee (MRFAC).  I thank AFTA director, Alicia Bolitho who represents AFTA on the MRFAC for her efforts to achieve this outcome. Links to download the videos are available here.

With the SA election due on the 19th March, members input into future policy to be presented is now time-critical.  Please send all policy ideas and concerns to admin@afta.net.au