it is pointless to shut down the recreational fishing sector during spawning periods yet apply no restriction on the commercial sector. It defies logic if sustainability is truly the goal.

This month I travelled to Perth to meet with the AFTA WA Team, Tim Farnell – Red Mullet Distributors, Brian Marshall – Compleat Angler Nedlands  & Ash Ram – Tackleworld Miami. This team have gone well above and beyond to achieve a record 17885 signatures on a petition to the WA Parliament, the largest ever e-petition to be tabled in the Western Australian Parliament.

The petition was presented to the Hon. Colin Stephen de Grussa MLC, Deputy Leader of the Opposition in the Legislative Council & Shadow Minister for Fisheries on the 11th October at Parliament House. Click here to read the Hansard extract.

During the petition presentation to the Shadow Minister, I was interviewed by Channel 7 (WA) news on the potential closures: click to watch here. I stated in part:

Getting the Government to understand we all want the same thing, that a sustainable industry is critical; however, we believe the early approach unfairly targets recreational fishers. 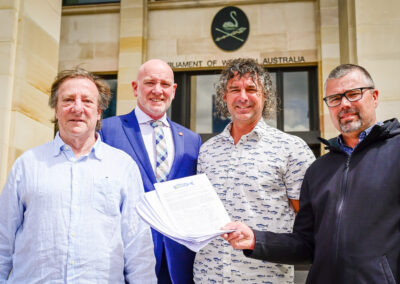 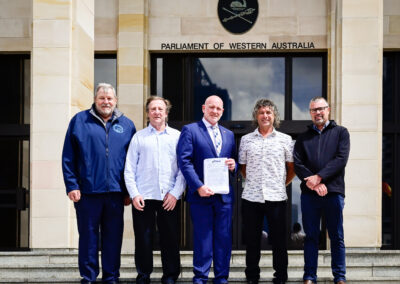 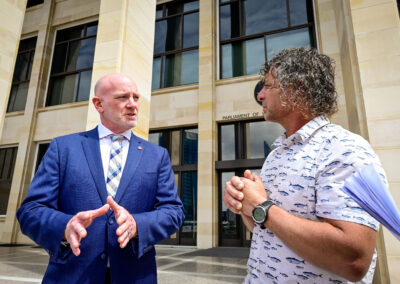 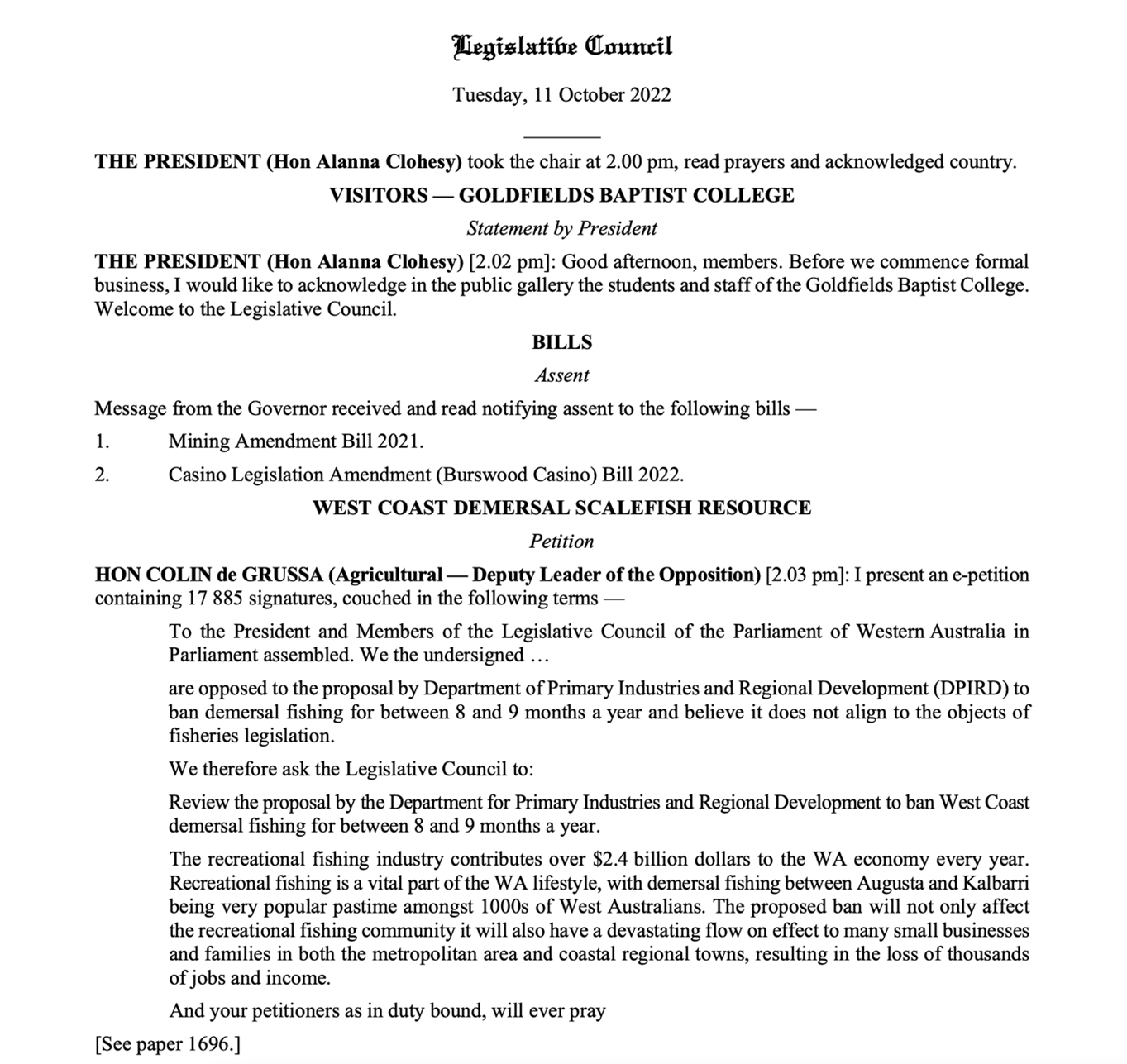 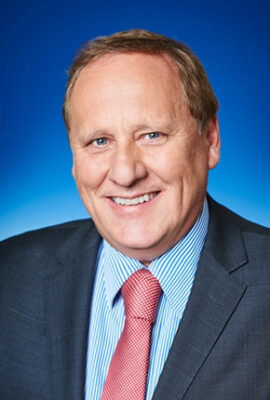 AFTA, through our WA Team, is a part of the Demersal Working Group headed by Dr Andrew Rowland, CEO, RecfishWest.  AFTA is in full support of the RecfishWest package.

The AFTA Board plus the AFTA WA team met with Fisheries Minister Don Punch to keep the dialogue open and pressure on the triple bottom line, the economy, the environment and the community.

The issue was presented on ABC Landline on Oct 1:

The Minister said he would release his findings and plan within a few weeks.

With the Victorian Election due on the 26th of November, there is very little to report on Recreational Fishing Policy. We have engaged all major parties, and the respective Political Party policies will be rolled out between now and the 26th November, or if like the recent Federal election, perhaps not at all.

As I have said previously, the Victorian recreational fishing policy model is the benchmark by which all state policies should be measured. The targets of growth (1 Million Fishers), access, investment and inclusion have been hallmarks, but that is not to say they can’t be improved.

AFTA has had continual dialogue with both Government & its agencies, including VFA and the Opposition.

Democracy is truly wonderful, and so is the ability to go fishing responsibly.

The SA Government have released “Management options for recreational fishing in the Adelaide Dolphin Sanctuary“, which closes for public consultation on 30 October 2022. Click here to have your say.

The purpose of the options paper is to: 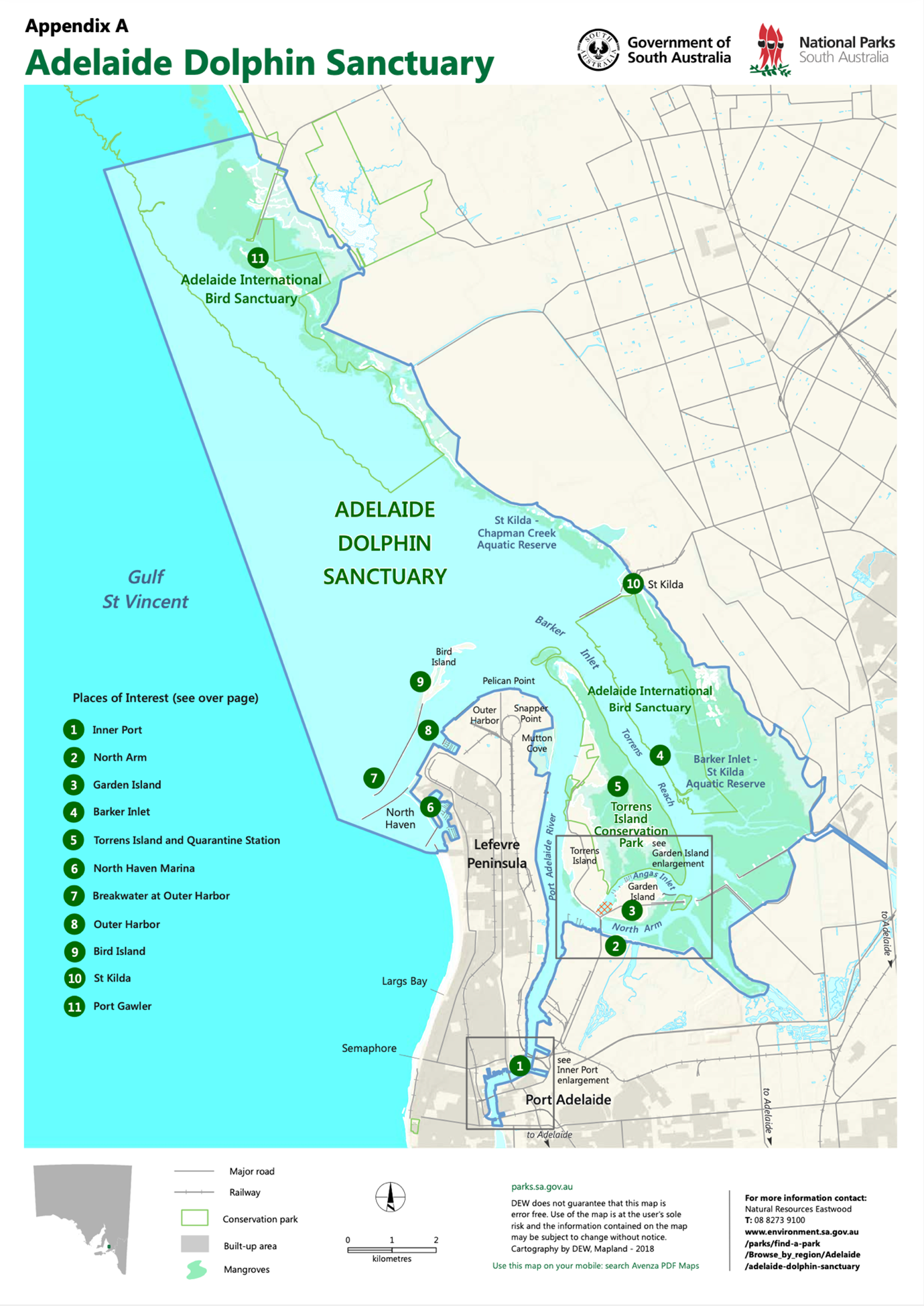 AFTA has concerns that this may be the thin edge of the wedge as an entree into closing or reducing the ability to fish.

Important to note this issue is being driven by the Department of Climate, Environment and Water, not the Hon. Clare Scriven MLC, Minister for Primary Industries (Recreational Fishing) and Regional Development.

I thank South Australian AFTA  Director Alicia Bolitho (TackleWorld Port Lincoln) for her observations and input on all things SA.

Southern Closures in east coast waters south of 22˚S (located slightly north of Stanage Bay, between Mackay and Yeppoon) for two three-week periods (six weeks in total) in February and March each year. The first southern closure will run from 1 February 2023 to 21 February 2023 and 1 March 2023 to 21 March 2023

Considering pre-existing charter bookings made up to a year in advance, seasonal closures will not apply to recreational fishers on licensed charter fishing trips until the following season, starting on 1 July 2023.

Prior to AFTA getting involved in this issue on behalf of members,  the Government proposed Seasonal Closures of 12 weeks, not the 6 as above.

DPI has been busy with its annual maintenance program on the FAD’s along the NSW coast.

Your customers can use DPI’s FishSmart app to find the coordinates of FADs nearest to them. The app provides a real-time map to locate the nearest FADs (tap on each FAD for its coordinates and current status).

After successfully releasing 80,000 juvenile Mulloway into the Georges River/Botany Bay and 10,000 fingerlings into the Hastings River last year, DPI NSW are still at it with 30,000 juvenile Mulloway into the Georges River in Sydney’s south, 10,200 fingerlings into the Hastings River, near Port Macquarie on the NSW North Coast and 19,000 fish into Lake Macquarie, north of Sydney

This is part of ‘Fish for life – Building a healthy fishing future’. Read more here.