AFTA President in the heart of the floods 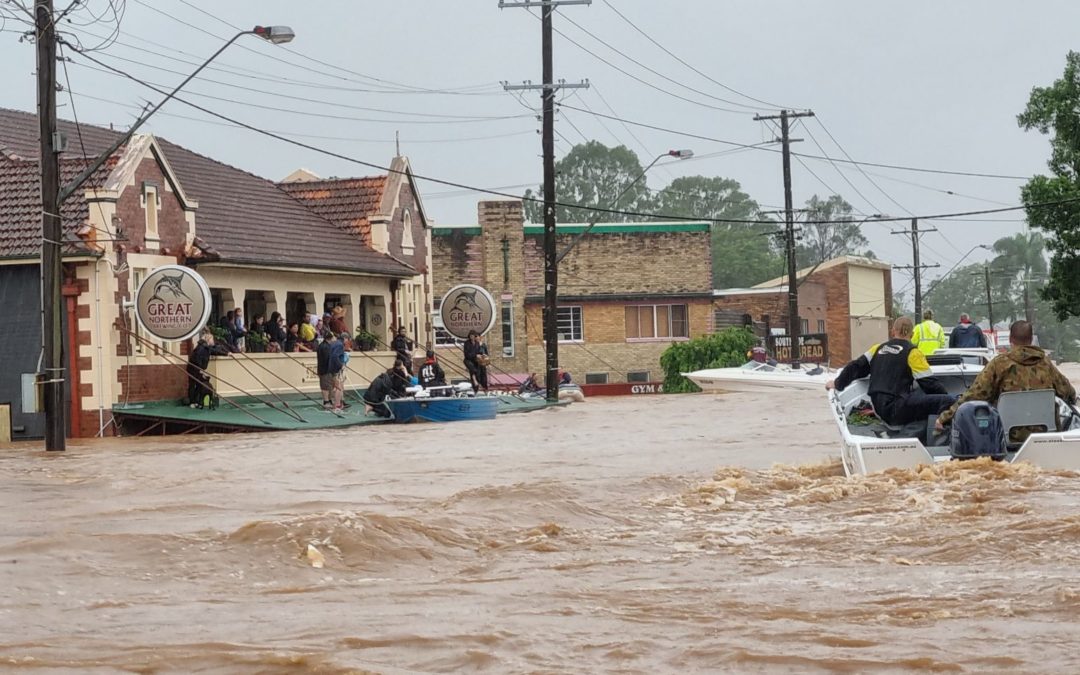 With all that is happening in the world, it is easy to forget the recent events in my local area. I was asked recently, when would I be able to move back into my house; I hope before Christmas, but who knows? The floods on the Richmond River were so destructive; there are literally thousands of stories; this is my perspective.

The people of Lismore went to sleep on a Sunday night in early March with a prediction of an 11.5m flood. This is major in that it goes over the flood levy, built to a 1 in 25 years at 10.6, but most houses in Lismore are built to a 12m flood height, so only bottom floors that are flood-proof go underwater, which is or were reported as a 1 in a 100 year. The highest ever previously recorded flood was 12.24m in 1974.

Lismore woke up that Monday morning with a record 770mm in the last 24 hours, almost overnight, which all fell in the already flooded basin. This meant the flood height, which was predicted to get to 11.5m by midday on Monday and break the levy at 6am that morning, was totally incorrect. Lismore woke up or got woken up by water, and the flood height was at 13.5m and topped 14.4m mid-morning, a full 2.26m higher than any previously recorded flood level and 3m higher than predicted the night before.

At this stage, I felt it was the right thing to do to take a boat up and rescue people. People we rescued in Lismore all believed they were safe when going to bed, but sadly, many woke with water so high that it was difficult to get out of their houses. They climbed onto their roofs or into attics or just had to hang onto internal furniture, only being able to breathe the small amount of air before the roof went underwater. I know this because we rescued people in all these situations, cutting people out of roof spaces as they were trapped inside.

This is an unprecedented water level, and we have politicians saying 1 in 1000 years or 1 in 3500 years. All I know is to look at your floor then look up at the roof, the floor level being the highest recorded flood level ever and the roof the new floodwater height; that is how much higher the water got across the whole valley, which is enormous.

Given this water was on the 2nd arm of the Richmond River, the CBD in Casino was underwater for the first time in history. These two arms of the Richmond River meet, and then that water came down through all the towns to Ballina. Water has never been in the street of my house, let alone through the house. I live about 5km from the mouth of the river, and everyone thought once the water came down, it would go out to sea like normal. (Photo of the area below at the start of the flood, not the peak in Ballina)

People had also asked why we lost all our furniture when we knew it was coming. Everyone has a different reason.  I was busy rescuing those trapped in their homes the day before. At 7am the next day, we woke up to evacuation orders. The floodwaters usually take two days, so no one thought it would reach Ballina so quickly. I managed to get back to the house a couple of times that day between the tides, and we lifted all our personal items, but not enough time or people to get the furniture up, and really I was still thinking it would reach the yard and not the house, but I was wrong.

The following day I managed to get the boat and make my way back to the house before the really high water came in, but in the 1km from where I launched the boat on the street to my place, people who didn’t listen to the evacuation orders now realise that they had to get out, and as I was the first on the scene with a boat. I was again rescuing people instead of lifting my furniture, and once I had done these eight rescues, I decided to go to my parent’s house. Due to the evacuation orders, my parents, Paul and Lesley, didn’t get to lift anything either, not even personal items, so I decided to save their photos and personal items at their house. After that, I returned to my house, and my house was already under, too late to save anything else.

In no way am I asking for sympathy or handouts; I am OK, and we are insured; my house is not listed in a flood zone, so insurance was fairly normal (well, used to be), but it gives you an idea of why people lost so much as it highlights no one knew or think that it would be this bad.

The thing that caused this problem in Ballina, on top of the amount of rain we had, was almost a perfect storm; a few things combined to slow this water down enough to flood Ballina and keep the water upstream high, causing more damage. We had a massive swell arrive that same day, over 4.5m, keeping the water in the river more and on top of this, it was a king tide, the 2nd highest tide of the year. Thankfully for most of Ballina, it had stopped raining, so the predictions for Ballina, which were a lot worse, didn’t happen. They forecasted another 1/2m higher, so thankfully many houses in Ballina didn’t go under. Many of our staff were saved or only had water in their yards; had the rain continued that day, there would have been a lot more loss in the area.

The destruction these floods have caused is far greater than anything the town has ever seen, as the flood was so much worse than previous floods. In Ballina alone (where we got off lightly compared to Lismore or other towns along the river), 600 homes cannot be lived in until rebuilt internally. Upriver some homes have been condemned because the floods physically moved the house or water was over roof height; the estimated damage is to over 5,000 homes in the region.

I want to put out a huge thanks to our fishing community. People came from all around with their boats helping those in distress. Not just for that day but for the next five days along the river. We will be doing something to help these local people that have lost their fishing gear; as we all know, fishing is not at the forefront of people’s minds when they are in this sort of disaster. But, if we can give the ability, once things return to some normality, to get back on the water fishing again, it will help the fishing community recover, including those businesses that have been affected.

I have put together a flood relief fundraiser; if you can assist, it would be appreciated by many.

With thanks,
Michael Starkey