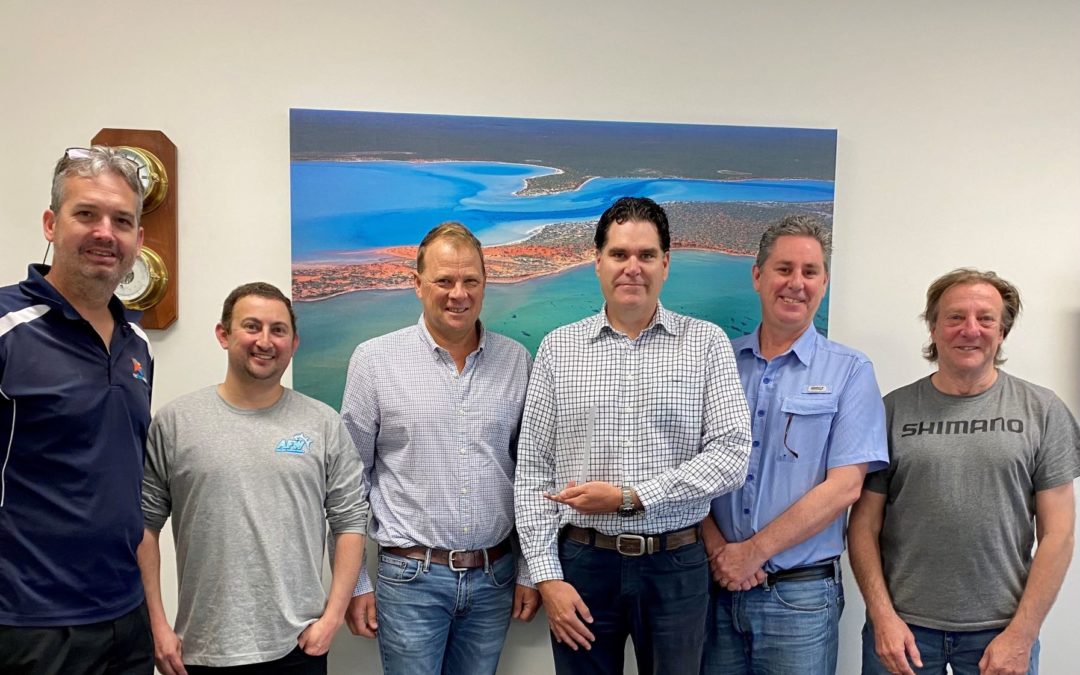 In the absence of our Gala Dinner and Awards night this year, AFTA called on past board member Ben Patrick of Halco Tackle to present this Industry Recognition Award. This year the Board received several nominations and voted unanimously for our winner, Dr Andrew Rowland, CEO of Recfishwest.

Over the last 12-18 months, Andrew has kept recreational fishing on the agenda of the executive level of the WA government (Premier and Cabinet), protecting current fishing experiences and developing new experiences. This has allowed the profile of recreational fishing to be raised without relying on or hitching our wagon to other sectors such as tourism which keeps us as masters of our own destiny.  This achievement is even more impressive given the backdrop of a global pandemic and the reduced effectiveness of the government agency responsible for managing fishing in recent years.

Taken a leadership role during COVID

COVID has consumed government resources since early last year. By taking a leadership role in supporting government policy as it relates to fishing Andrew was able to protect fishing access during a time when other governments took the easy way out and simply banned fishing. He ensured people were able to still go fishing and received clarity as to fishing as a permitted activity from the executive level of government even when government departments were providing conflicting advice about fishing. By asking people to honestly evaluate if fishing was an essential activity Andrew was able to convince the Premier and Minister that our sector was responsible enough to manage ourselves during the early period of COVID when there was lots of fear and uncertainty.

Once the initial uncertainty of COVID had passed the government moved into a COVID recovery phase and Andrew quickly developed and presented a recreational fishing COVID recovery plan to government and was able to secure a $6m recovery package which was announced by the Premier in August last year.

Continue to understand the economics of recreational fishing

We all know governments like to look through a prism of economics when making decisions so Andrew has made sure they have some recreational fishing economic information from which to base decisions. Following on from the broad economic contribution study in 2017 that showed recreational fishing directly injected $2.4 billion in the economy annually Andrew ensured a species-specific study was undertaken. This study showed recreational fishing for WA Salmon contributes $331million to the economy each year. Once again, the results of this study were announced by the Premier providing confidence in the findings from the executive level of government. This species-specific economic report was a first for any recreational fishing in WA and one of the very few that have been done for an oceanic species anywhere in the world.

It is no secret that some groups within Fisheries are not supportive of stocking and over the last 12-18 months Andrew has been able to grow support from the executive level of government for stocking activities effectively rendering any departmental resistance to stocking irrelevant. The support for stocking can be seen in the COVID recovery package announced by the Premier which will see another million-barramundi stocked into lake Kununurra along with a Yellowtail Kingfish stocking program.   This is a continuation of the marron stocking program announced by the Premier a few years ago.

The importance of the state-wide FADS trial is another achievement that should not be underestimated. Such a trial has been talked about for a long time but Andrew was able to get this trial happening and even had the Minister launch it. With the commercial sector not supportive of more FADs being deployed this trial provided a clear example of the government making a decision it knew would not be popular with one stakeholder but popular with another.  The importance of getting governments to make decisions it knows will not be universally supported is quite significant.

Back in 2013 two artificial reefs were deployed in collaboration with government. This was a giant step forward in the reefing space that required government policy to be developed and government to do something new. In the ten years since Recfishwest has continued to develop our knowledge and progress artificial reef by continually pushing the boundary of what an artificial reef can be. In the last 12 months Andrew had taken significant steps in progressing opportunities associated with repurposing Oil and Gas infrastructure and getting other industries to build infrastructure on behalf of the recreational community. In what has long been the domain of research academics Andrew has guided Recfishwest into the decommissioning space positioning recreational fishers not just as the main beneficiaries of decommissioning but also bring us into the decision-making process. The liabilities surrounding decommissioning is estimated to run into the tens of billions of dollars in Australia over the next few decades and Andrew has made sure the recreational fishing sector not only has a seat at the table but also plays a key role in maximising the benefits decommissioning can provide for fish stocks and fishing experiences.

Dr Andrew Rowland, AFTA’s Winner of an Industry Recognition Award CONGRATULATIONS TO YOU!

We’re certain you don’t do this work on behalf of the recreational fishing industry in Western Australia for any accolades, but the AFTA Board is pleased to be able to recognise your efforts.