AFTA understands and advocates for the triple bottom line, “Social, Economic & Environmental” sustainability As a business association, AFTA needs to advocate for our members business interests first rather than focussing only on fishing.

After 12 months of COVID restrictions, AFTA held its first “face to face” Board meeting on 28th April at the Gold Coast.  Obviously, the Trade Show was the key point of discussion and, importantly, how we can make the show a better and more beneficial experience for all of our members.   In addition, your directors also provided valuable input and direction as we develop positive policy agenda going forward.

The minutes of the meeting are available to members on the Members Resources page of our website.

Time is flying by with just seven weeks till Show Day, and it is time to make your bookings to attend the AFTA Trade Show from 8th – 10th  July.

As previously advised, the AFTA Trade Show successfully granted “Approved Event” status under the federal “Business Events Grants” program. Whilst there were updates (11 March) to the “Business Events Grant Package” benefiting many of those attending the AFTA Trade Show, new applications were closed on 30 March 2021. Applications may re-open subject to funding allocations.

You must monitor https://www.austrade.gov.au/Australian/Tourism/Tourism-and-business/Grants/business-events-exhibitor-grants-program to see when applications are open again.

Please note that while AFTA is an approved Business Event, individuals must submit their own claim for funds, citing AFTA as the event.

AFTA Board members met with Qld Minister for Fisheries, The Hon Mark Furner in Parliament on the 13 May to address the following issues:

Filleting of fish -v- keeping of whole fish whilst at sea and size limits.

Currently, the legal length of a fish fillet is 40cm, https://www.qld.gov.au/recreation/activities/boating-fishing/rec-fishing/rules/limits-tidal

The irony is that the legal length of the whole fish may be substantially well under that fillet size; for example, the permitted length of Coral Trout (other than blue spotted) is 38cm off, which a skilled filleter may get a 25cm fillet. AFTA put forward a simple, sensible, workable solution of the “legal fish fillet size”, less say 5cm for the head as the “legal fillet length”, and still maintain the Skin and Scale on the fillet for ID purposes.  This is a conservative measure that will not impact fish stocks but will provide better treatment of the fish for the dinner table and greater certainty for anglers.

The Black Jewfish closures significantly impact recreational anglers and retailers alike and sadly ignore proper resource sharing framework.   AFTA put to Minister Furner that proactive management means setting both a TAC Quota for commercial fishing and bag limits for recreational anglers.  Once set, the bag limits should not be affected by commercial fishers achieving their TAC Quota; they should be independent of each other.

AFTA Members are being impacted by season species closures and the subsequent “No Target” rule.  Implementing a “No Catch, No Take” rule against a “No Target” rule would allow fishing without potential prosecution in areas where species closures are in place.  Allowing a “No Catch, No Take” rule during Barramundi season closure would help keep tackle shops viable whilst not impacting the Barramundi breeding season as recreational fishers look toward other species in those same waters.

The election in Tasmania has seen the return of the Liberal Government.  We congratulate the candidates from all political parties for playing their part in democracy and, in particular, all members on being re-elected or elected for the first time. 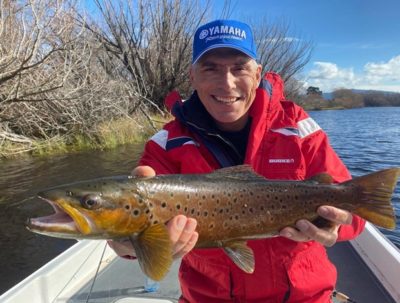 FTA extends its congratulations to Nick Duigan, one of the long-running TV show hosts, “Hook Line & Sinker”, for being elected as the Member for Windermere. I believe Nick to be the first fishing media identity elected to any Parliament in Australia.   It will be great to have a person with a depth of understanding of our industry as an advocate.

Again, AFTA appreciates the work of TARFish CEO Jane Gallichan on “The Better Fishing for Everyone” priority statement.  This was very influential in shaping Tasmanian recreational fishing policy statements from all sides of the spectrum.

While the Government is yet to release the Great Lakes/Port Stephens Marine Park review findings, the NSW government has called for “Expression of Interests” for new artificial reef locations.

This is our opportunity to help decide where the next NSW DPI Fisheries’ hugely popular offshore artificial reef installation program will be. These reefs are funded from recreational fishing licence fees, and AFTA encourages members and the broader recreational fishing community to nominate suitable locations for NSW’s next artificial reef locations. 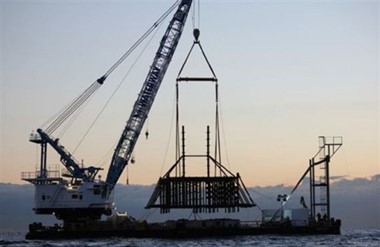 To nominate locations for consideration, fishers should complete the survey https://www.surveymonkey.com/r/NSWArtificialReefs before 17 June 2021.

Does it protect fishing’s future? And does it encourage fishing participation?

As an industry association, AFTA’s focus is on the sustainability of our members in business.

We need to see both fishing and profitability combined.

AFTA understands and advocates for the triple bottom line, Social, Economic and Environmental sustainability. As a business association, AFTA advocates for our members business interests first rather than focussing solely on fishing. How does a policy decision impact the trade? Whether it be an area, geography, wholesaler, retailer, the people fishing?

AFTA will continue advocating the “no take & catch and release” policies against a “no target” rule, greater access to areas, bag limits rather than boat limits, and address no fish zones.

See minutes for more details at 14 (a). https://afta.net.au/wp-content/uploads/simple-file-list/Minutes/2021-April-28-AFTA-Board-Meeting-Minutes.pdf

The “Let’s Fish” video clip production for South Australia and Queensland is nearing completion with individually tailored media programs supported by substantial grants from each Government.

Once released, we would encourage all AFTA Members to help in promotion; after all, the key objective is to have more people engaged in recfishing, which is a direct benefit to your business.  AFTA will be supporting the campaigns with financial support in Media distribution

Don’t be Alarmed or Surprised 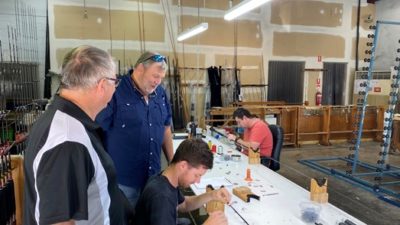 Whilst on the road, it was great to drop in on Wilson Fishing, Brisbane and catch up with Graeme Wilson & Kord Luckus.

Whilst there, I received an education on the materials and layup styles in carbon fibre rod construction and then watched as the rods were built by a team of 14 very skilled people. 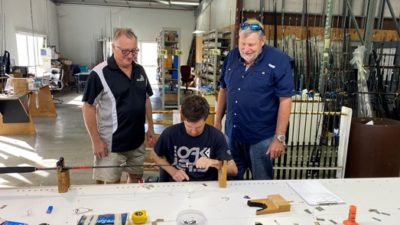 For a company established in 1946, now employing 50 people, they are going stronger than ever. Congratulations!

As I travel around the countryside, I am dropping in at random to meet with both AFTA members and non-members.  The purpose, besides introducing myself, is to get the latest on the ground feeling of where our industry is currently at.

So, if I happen to drop in for a chat (coffee – black, strong please) I look forward to meeting you and your staff.

Tight lines, and I look forward to seeing you at the AFTA Show.