More Fishy Claims About the Reef 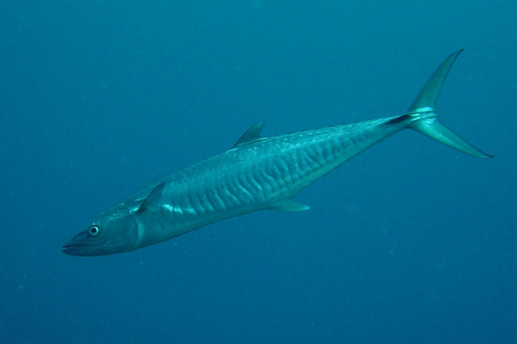 For public servants charged with the management of a natural resource to effectively bankrupt a healthy industry as a precautionary measure in response to a highly uncertain and unlikely projection from an unvalidated computer modelling would be gross incompetence at best. To do so at a time when the nation is facing an incipient threat of global recession could arguably be seen as economic sabotage of the first order.

Yet this is precisely what is happening on the Great Barrier Reef, where Queensland Fisheries is jettisoning common sense and a wealth of readily available evidence to promote the claim that the Spanish mackerel population has suddenly collapsed and a only a severe reduction in the allowable catch can save the species.

Below, point by point, what the fisheries bureaucrats are determined to overlook:

1/ For over a century this fish sustained a catch up to two to three times larger than the catch in recent years.

2/ The total allowable linefish catch on the GBR is less than 1 per cent of the sustainable harvest rate of well managed reef fisheries elsewhere.

4/ The distance of the reefs offshore and strong prevailing winds during most of the year also strongly limit recreational fishing.

In Queensland, a total allowable catch (TAC) and individual transferable quotas (ITQs), introduced in 2004 for the commercial fishery, substantially reduced participation to the lowest levels recorded for the previous 25 years.” and “In 2018–19 total estimated landings for Queensland and New South Wales were approximately 464 t which was well below the MSY (Maximum Sustained Yield) calculated in O’Neill et al. 2018. This level of fishing mortality is unlikely to cause the stock to become recruitment impaired. On the basis of the evidence provided above, the East Coast biological stock is classified as a sustainable stock.

7/ Then, suddenly, in the 2021 assessment report new population modelling incorporating new estimates and assumptions was introduced and the previously estimated biomass level which was at 60 per cent of the unfished biomass level estimated for 1911 was deemed to be reduced to a disastrously low 17%. That the catch had not collapsed was attributed to “hyperstability” caused by all the fish concentrating in only a few areas to spawn thus causing catches to remain high.

8/ Although seemingly plausible, “hyperstability” in this instance is an entirely  hypothetical office-based speculation. Although spawning concentrations are clearly observable, the idea that these are limited to only the few areas where most of the commercial catch is made is an unlikely assumption. These are simply the ones most easily accessible from the few fishing ports in the region and there has been no need for fishermen to incur the expense, time and effort to go further away. Distance and weather assure that most of the GBR is effectively unfished.

9/ Although the recently published Independent Review of the Stock Assessment of
East Coast Spanish mackerel (Scomberomorus commerson) in Queensland, Australia
avoids any overt criticism of the new modelling, it clearly identifies a number of critical uncertainties and assumptions which could lead to large errors in the assessment.

10/ The initial news reports last year on the purported stock decline indicated that a scientific study detailing the new modelling and the stock decline had been submitted to the prestigious Proceedings of the National Academy of Science (PNAS) in the US and that an open review to determine management restrictions would follow publication. Opting for a lengthy delay for publication in a high-profile foreign journal when urgent attention was needed, and when Queensland Fisheries could readily publish it themselves, appears to put priority on publicity and prestige above prompt attention to a severe threat, deserves explanation.

11/ The notable absence of any recent mention of the anticipated PNAS publication now raises another matter. PNAS is a peer reviewed journal, and the review should by now be completed.  What was the outcome of the review and when will the study be published?  Or, has it failed to pass review at PNAS and, if so, is it still going to be used as the basis for economically devastating cutbacks to the fishery?  Also, if it did pass review at PNAS, why  did QLD Fisheries then contract for another “independent review” (see #9 above) they would have had to contract for and then publish it themselves?

12/ Finally, was the 2021 decline a collapse of the mackerel population, an artifact of the modelling or simply a strong reduction in both fishing effort and demand for fresh fish in the midst of a major virus pandemic inflicting major impacts across the entire economy?

The Spanish mackerel is a common species widespread in the tropical and subtropical Indo-Pacific region.  The population in Australia alone would surely be in the millions.  It is not an endangered species.  Moreover, there is no record of any species of any marine fish or invertebrate anywhere that has ever been exterminated by fishing.

Below, how the bureaucrats chart the Spanish Mackerel’s “decline”. 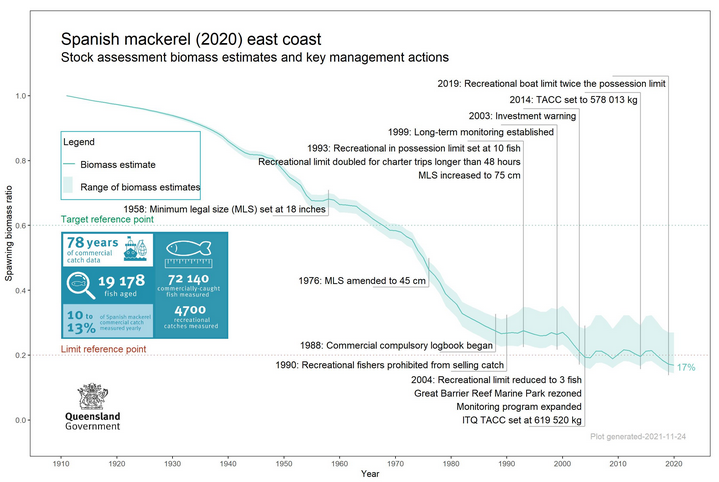 In view of the numerous assumptions, doubts, uncertainties, conflicting evidence, and unanswered questions, it would seem most appropriate to continue with the previously established fishing effort and allowable catch limits to determine if any clear trend of decline is in fact indicated.  In the meantime, this would also provide adequate time to more thoroughly address the numerous issues involved and not rush to judgement entirely on the basis of a totally unvalidated modelling.

The only credible risk in deferring any severe reduction in allowable catch might be a possible delay in recovery time in the unlikely event that both the severe population decline and spawning largely restricted the current fishing grounds, proved to be real. On the other hand, an immediate severe reduction in allowable catch would be highly certain to be disastrous for the fishery.  It would also curtail any ability to either determine the reality of decline or to monitor its ongoing condition.

A precaution that is a greater risk than the threat it is aimed to prevent is an oxymoron even an ox would seek to avoid.