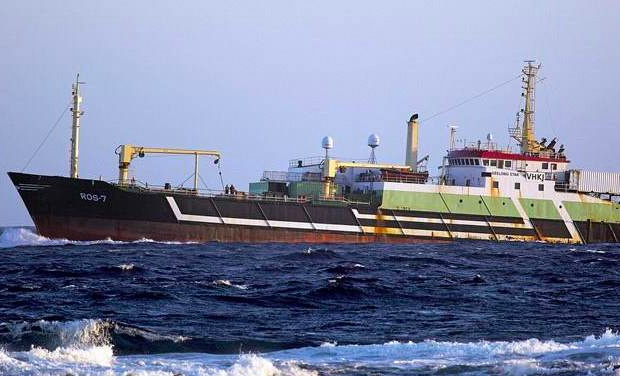 The Australian Recreational Fishing Foundation (ARFF) today called for greater transparency and disclosure of the fishing operations of the Geelong Star. The call comes after conflicting accounts about a recent interaction between the vessel and a whale shark near Eden NSW. Whale sharks are a protected species under the Convention for International Trade in Endangered Species of Wild Flora and Fauna (CITES).
Allan Hansard, Managing Director of ARFF said that “ARFF understands that in response to media inquiries the Australian Fisheries Management Authority (AFMA) has confirmed the interaction with the whale shark and that 2 fins were entangled in the outside of the net. Once freed, the shark swam away unharmed.”
The Small Pelagic Fisheries Industry Association (SPFIA) on its Facebook stated, “a whale shark had come alongside the net, the vessel maneuvered away and the whale shark had swum off unharmed.”
Other unconfirmed reports in the media were that the whale shark was caught in the net and once freed with mechanical assistance it floated away.
“ARFF calls for the video footage of the Vessel’s operation during the intervention are made available to confirm the actual and factual process of events,” said Mr Hansard.
“This encounter has raised the issue of how many interactions like this one with the whale shark and other threatened and endangered species have occurred that we don’t know the full story about?”
“In addition, it raises the issue about other by catch of the vessel. How many marlin, kingfish and other valuable species for recreational fishing – in addition to the bait it extracts –has the Geelong Star caught that we do not know about?”
In its submission to the Senate Inquiry on Supertrawlers ARFF raises this issue and states that: “fish that are not sold and are discarded are recorded on logbooks of the Geelong Star. However, the data is not publically available. This situation makes it impossible to determine the potential impact of the Geelong Star’s activities
on key recreational species that are non-target species. As these species are high value species for recreational fishing, it could be that the Geelong Star is catching, killing and discarding species that potentially exceed the value of the small pelagic fish it is catching for sale from these areas.”
“ARFF calls for all information on discarded fish species caught by the Geelong Star are made public. This will provide transparency in relation to the opportunity cost of the vessel’s activities to the recreational fishers and the local communities that support them” concluded Mr Hansard.
See the full ARFF submission to the Senate Inquiry into Supertrawlers at:
https://www.recreationalfishing.com.au/images/PDF/ST-SUBMISSION.pdf
ENDS