Dear fellow anglers,
As you are aware there is a push by the NSW Government to reclaim one of the most safest, productive and easy accessible spots for small boats, kayaks and spearfishers on Botany Bay. The plan is to take Molineux Point and a big chunk of Yarra Bay to bring the mega cruise ships into Botany Bay and  restrict our access to this area. Our prime kingfish, bream, mulloway and trevally spots will be decimated. The spots were our baitfish congregate will be lost, we will lose vital habitat when they dredge half of Yarra Bay to fit these ships in, there will be pretty much nowhere to fish any in areas on the northern side of Botany Bay for small boat, kayak fishers and spearfishers – we will lose those that have an outstanding fish-producing reputation such as Molineux Point and Yarra Bay.

Keep in mind this area was also part of an almost $10 million investment from your licence fees to make it a Recreational Fishing Haven. But now we have a NSW-Government-sanctioned Lockout on the table once again.

Please join us on 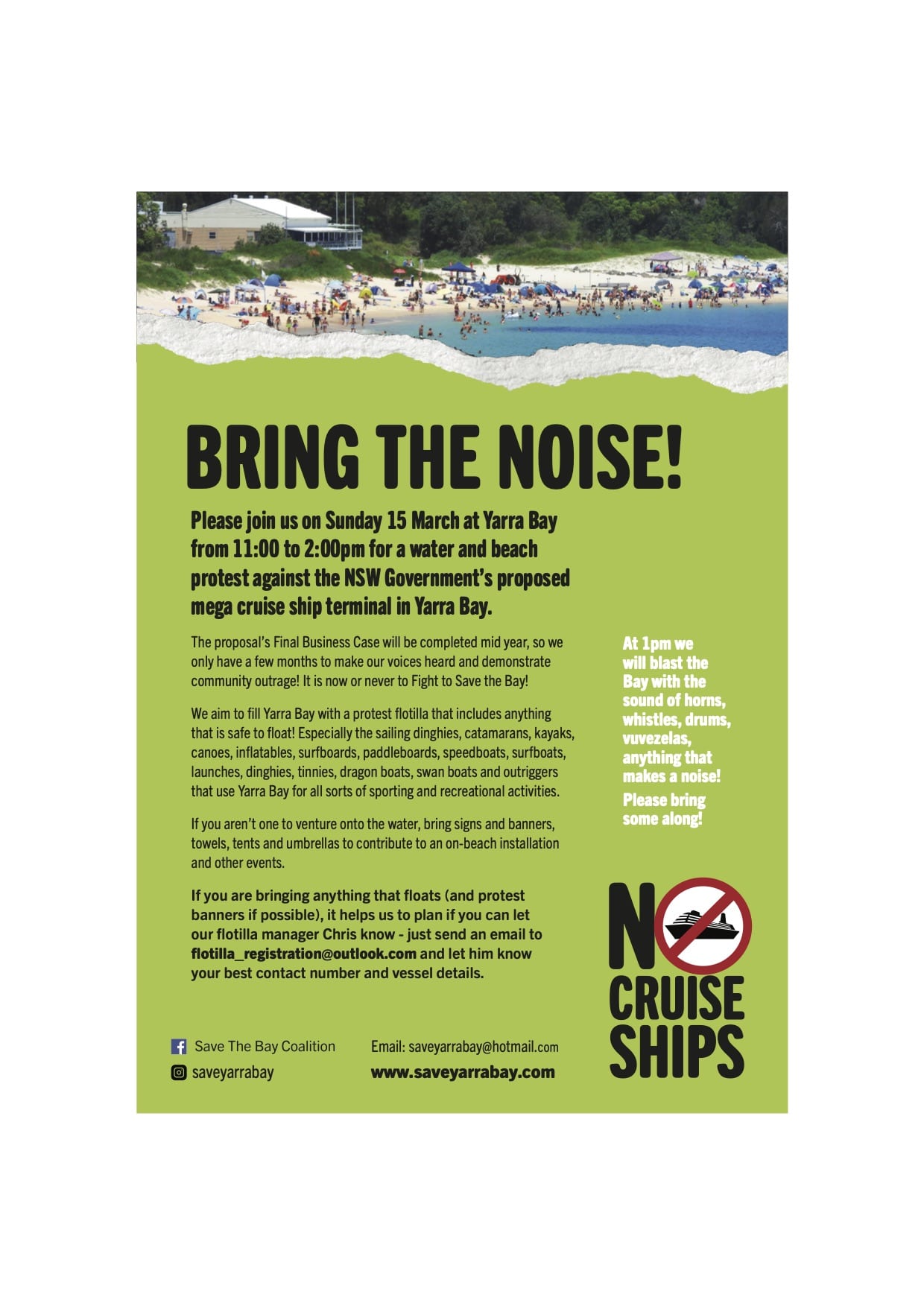 for a water and beach protest against the NSW Government’s proposed mega cruise ship terminal in Yarra Bay. The proposal’s Final Business Case will be completed mid-year, so we only have a few months to make our voices heard and demonstrate community outrage. It is now or never to Fight to Save the Bay! We aim to fill Yarra Bay with a protest flotilla that includes anything that is safe to float! Especially the sailing dinghies, catamarans, kayaks, canoes, inflatables, surfboards, paddleboards, speedboats, surfboats, launches, dinghies, tinnies, dragon boats, swan boats and outriggers that use Yarra Bay for all sorts of sporting and recreational activities. If you aren’t one to venture onto the water, bring signs and banners, towels, tents and umbrellas to contribute to an on-beach installation and other events.

If you are bringing anything that floats (and protest banners if possible), it helps us to plan if you can let the flotilla manager Chris know – just send an email to flotilla_registration@outlook.com and let him know your best contact number and vessel details.

At 1.00 pm we will blast the Bay with the sound of horns, whistles, drums, vuvuzelas, anything that makes a noise! Please bring some along!

This is an area recreational anglers have had to fight tooth and nail for, against loss of access by port expansions, the third runway, new ferry terminals and who knows what else the NSW Government has planned to lessen your fishing experience, lock up public access and take away your enjoyment of a pastime that has immense social and health benefits for families, youth and the local indigenous community.

The RFA is happy to support and endorse such a family orientated campaign against any more loss of fishing access in Botany Bay so pass this email on, print the flyers and circulate them and get down on the 15th of March to show your opposition to this plan to lock up Yarra Bay and destroy Molineux Point for fishers and mainly the fish!.