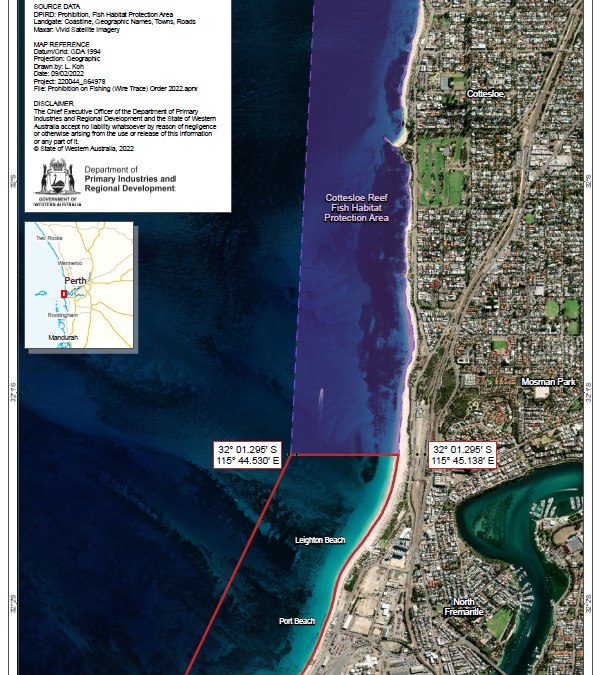 The McGowan Government has moved to help put a stop to fishing for sharks from Port Beach to South Cottesloe, amid concerns from local residents that such practices may be attracting sharks close to popular swimming beaches.

The Government has been working closely with the City of Fremantle and Bicton MLA Lisa O’Malley on options to minimise the impacts of recreational shark fishing, and has formed a view it is incompatible with other activities such a swimming, surfing and kite surfing on the popular stretch of coastline.

Under the Fish Resources Management Act 1994, the Minister has this week signed off on restrictions prohibiting the use of wire traces (primarily used to fish for sharks) when recreational fishing within 800 metres of the shore at Port and Leighton beaches through to South Cottesloe.

A Fish Habitat Protection Area is already in place for Cottesloe, with beach fishing for sharks prohibited in this area.

Fishing for other species such as tailor, herring or whiting that does not involve the use of a wire trace will still be allowed at the beaches within the current fishing regulations.

Department of Primary Industries and Regional Development compliance officers will be ensuring fishers adhere to these new restrictions and existing prohibitions on the use of mammal or bird products, such as blood and offal, as burley when fishing for sharks.

This measure will address immediate concerns and in liaison with relevant local governments, recreational fishers and other stakeholders, consideration may also be given to the regulation of recreational shark fishing at other popular swimming beaches along the WA coast.

“The McGowan Government is delivering the most comprehensive shark mitigation strategy in the country so people can continue to enjoy our beautiful beaches with confidence.

“These restrictions will prohibit the use of wire traces when recreational fishing between Port and South Cottesloe beaches, responding to community concerns and further enhancing our comprehensive shark mitigation program.

“In addition to these additional new restrictions, I strongly encourage people to keep using their common sense and to not fish for sharks at popular beaches in close proximity to swimmers, snorkellers and surfers.

“We will continue to work closely with local governments and communities to protect the safety of beachgoers.”