SA Government calls on fishers to stand up and be counted 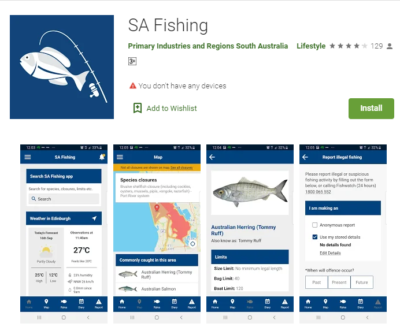 South Australian fishers can volunteer to be part of a cutting-edge national research project to accurately estimate the number of recreational fishers and their catch.

The national project will assess whether self-reporting from fishers on the SA Fishing app is more effective than the traditional phone/diary survey.

Phone and diary surveys were previously undertaken in 2000/01, 2007/08 and 2013/14 to assess recreational fishing catch and participation in South Australia.

Through this process, random people were selected and asked to fill in a fish catch diary for a year. Given fishers and non-fishers participate, there has been some scepticism by recreational fishers about how accurate this method is, especially as this information is used to determine bag and boat
limits.

Minister for Primary Industries and Regional Development David Basham said every recreational fisher can get involved in this exciting project.

“Recreational fishing is incredibly important to South Australia as we know it contributes over $160 million to our state every year,” Minister Basham said.

“Ensuring we have an accurate estimate of recreational fishers and their catch is vital because this information is considered when deciding bag and boat limits.

“Where there is low confidence in estimates of recreational fishing effort, fishery managers and fishing representatives are forced to adopt more conservative and cautious bag and boat limits to protect the sustainability of fish species.

“The more data we have, the more confident we will be to adopt bigger bag limits.

“A traditional phone/diary survey will commence this month and separately next month all fishers who have downloaded the SA Fishing app will be encouraged to participate in the count. In a year’s time, the researchers will look at the data and determine the most effective method.”

Independent Chair of the Minister’s Recreational Fishing Advisory Council (MRFAC), Ms Sharon Starick says that the MRFAC have been involved in the design of the project and encourages recreational fishers to participate.

“Changes in technology provide opportunities to look at new ways of collecting data and information. The MRFAC have been involved in the design of the project because we need our method of estimating recreational fisher numbers to also evolve so we are confident the estimates
are accurate.

“I encourage anyone with a passion for fishing to download the app. The more people who participate, the better the end product will be. It’s easy to volunteer, and given bag and boat limits are decided using this information, it is so important we can trust the estimates.

Department of Primary Industries and Regions staff and Fishcare volunteers will be present on boat ramps, jetties and other fishing sites collecting fishing data over the next year. This information will also feed into determining the best data collection method.

For more details on the project click here. www.pir.sa.gov.au/fisherscount